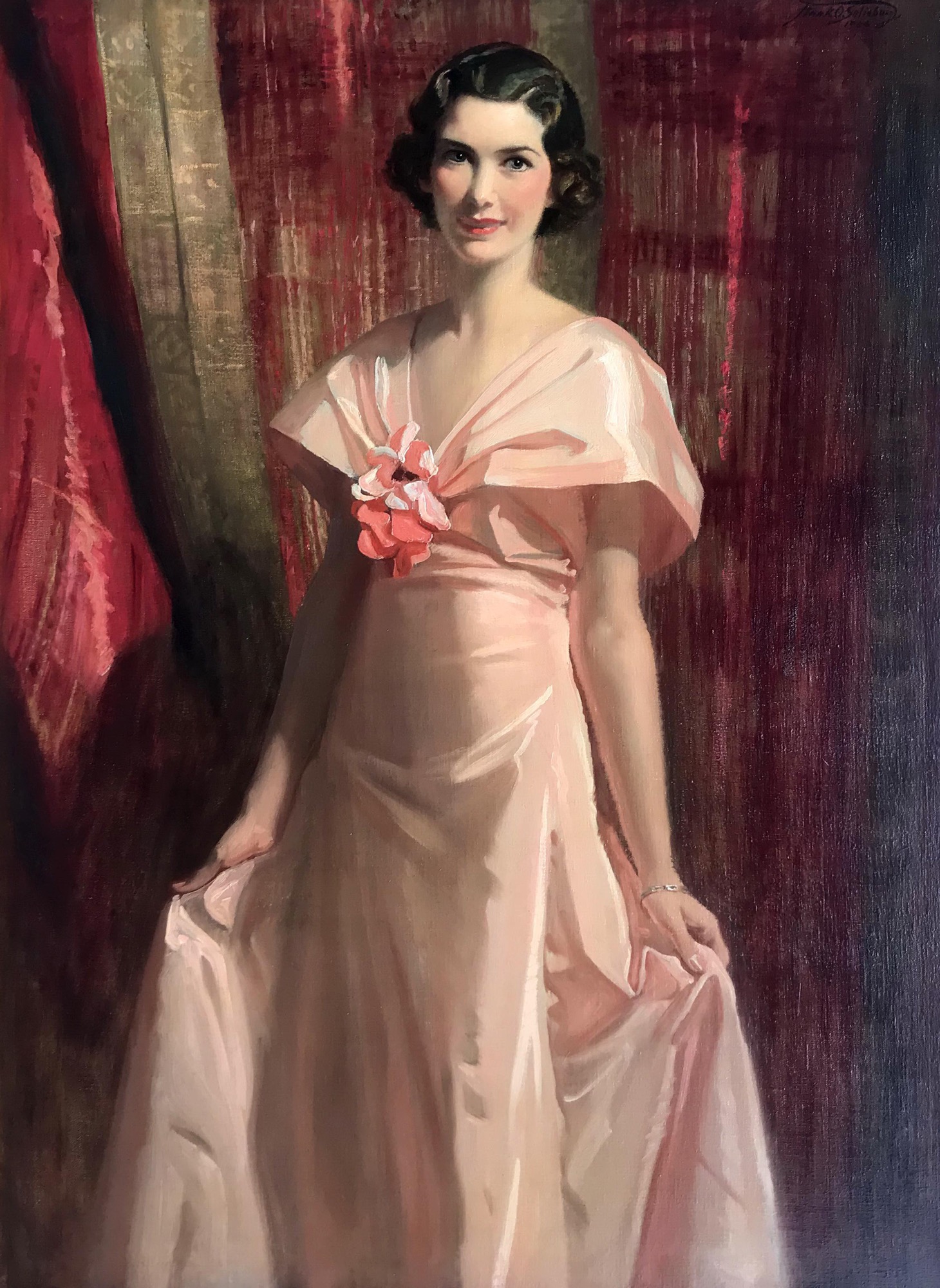 Frank Owen Salisbury (1874-1962) British
Francis ("Frank") Owen Salisbury was an English artist who specialised in portraits, large canvases of historical and ceremonial events, stained glass and book illustration. In his heyday he was valued and admired on both sides of the Atlantic.
One of 11 children, Salisbury was such a delicate child that he was educated at home, in the main by his student teacher sister. Uncertain as to his ability to find and maintain a job, the family determined that he be apprenticed, at the age of 15, to Henry James Salisbury, his eldest brother, who managed a major stained glass company in Alma Road, St Albans. He rapidly acquired all the practical skills of a stained glass artist and exhibited exceptional skills in the painterly detail that was applied to glass before its final firing. This led to his brother sponsoring him to attend Heatherley's School of Art three days a week to further a career in painting. He then won a scholarship to the Royal Academy Schools which he attended for five years and where he won two silver medals and two scholarships, including the Landseer scholarship which funded his to travel to Italy in 1896. In due course he would have seventy exhibits accepted for the annual Royal Academy Summer Exhibitions, from 1899 until 1943.
In 1901 he married Alice Maude with whom he had twin daughters. His first Royal Academy exhibit was a portrait of Alice. It is for portraiture that he is best known. His speed in producing portraits stemmed from his painting his own twin daughters every morning for an hour and his career began with child portraiture and his painting the Hertfordshire gentry and members of the Harpenden Methodist Church. He had a studio at his home, Sarum Chase. A providential meeting with Lord Wakefield, founder of Castrol Oils and a Methodist philanthropist, saw his introduction to society portraiture. Salisbury's being selected to paint the Boy Cornwell in the Battle of Jutland then brought him to the notice of Royalty. Lord Wakefield then arranged for him to paint President Woodrow Wilson whilst he was in London, but Wilson departed for Paris and the opportunity was lost. It was to be John W. Davis, American Ambassador to London, who encouraged Salisbury to go to the USA; Davis had met Salisbury at art receptions and had admired his child portraits.
Twenty-five members of the Royal House of Windsor sat for Salisbury and he was the first artist to paint HM Queen Elizabeth II. He painted Winston Churchill on more occasions than any other artist; the two iconic images of Churchill - The Siren Suit and Blood, Sweat and Tears are both Salisbury images.
Other significant portraits include those of Richard Burton, Andrew Carnegie, Sir Alan Cobham, Sir Robert Ludwig Mond, Maria Montessori, Montgomery of Alamein, Earl Mountbatten of Burma, Benito Mussolini, John Player, Lord Rank, Jan-Christiaan Smuts and Sir Henry Wood.
Salisbury was remarkably successful in the USA where he was deemed to have fulfilled the American Dream. He made thirteen visits and painted six Presidents with his Franklin D. Roosevelt remaining as the official White House portrait to this day. Industrial and financial giants who sat for him included Henry Clay Folger, Elbert Henry Gary, Edward Stephen Harkness, Will Keith Kellogg, Andrew William Mellon, John Pierpont Morgan, George Mortimer Pullman, John Davison Rockefeller Jr., and Myron C. Taylor.
Salisbury was a Methodist who took his faith seriously and always considered his gifts to be God given. He manifested the Protestant work ethic and the Non-Conformist conscience. He produced much work for the mainstream denominations, in particular Methodism and the Salvation Army. He painted posthumous portraits of historical Methodist figures with perhaps his best known image being that of John Wesley in John Wesley's House in London. Salisbury arranged and paid for the restoration of Wesley's House in 1934 which restoration stood the test of time for sixty years. He lived an alcohol free lifestyle and was firmly in favour of Prohibition in the USA. He refused to work on Sundays. Many of his associates including Pierpont Morgan, Lord Wakefield, Will Kellogg and Andrew Mellon were both rich industrialists and Christian philanthropists. He bequeathed Sarum Chase in trust to the British Council of Churches. However, the BCC sold the mansion and auctioned its contents. His range of portraits stretched from Billy Graham, to four Salvation Army Generals, to Pope Pius XII.
Significant collections of his work are held at the Chicago Historical Society, National Portrait Gallery in London, New York Genealogical and Biographical Society, Royal Air Force Museum in London, Wesley's Chapel in London and the World Methodist Headquarters in North Carolina.

Thank you for your enquiry.

We will get back to you soon.